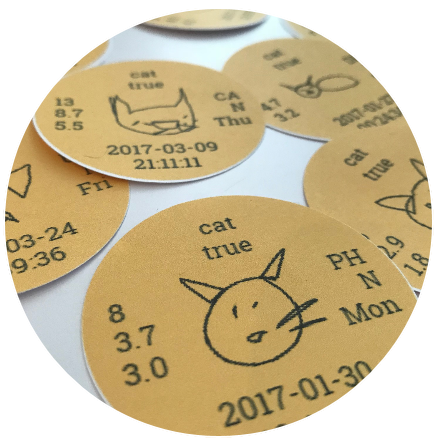 This long weekend (in Auckland anyway!), I spent some time updating the Quick! Draw! sampling tool (read more about it here Cat and whisker plots: sampling from the Quick, Draw! dataset). You may need to clear your browser cache/data to see the most recent version of the sampling tool.

One of the motivations for doing so was a visit to my favourite kind of store – a stationery store – where I saw (and bought!) this lovely gadget:

It’s a circle punch with a 2″/5 cm diameter. When I saw it, my first thought was “oh cool I can make dot-shaped data cards”, like a normal person right?

Using data cards to make physical plots is not a new idea – see censusatschool.org.nz/resource/growing-scatterplots/ by Pip Arnold for one example:

But I haven’t seen dot-shaped ones yet, so this led me to re-develop the Quick! Draw! sampling tool to be able to create some 🙂

I was also motivated to work some more on the tool after the fantastic Wendy Gibbs asked me at the NZAMT (New Zealand Association of Mathematics Teachers) writing camp if I could include variables related to the times involved with each drawing. I suspect she has read this super cool post by Jim Vallandingham (while you’re at his site, check out some of his other cool posts and visualisations) which came out after I first released the sampling tool and compares strokes and drawing/pause times for different words/concepts – including cats and dogs!

So, with Quick! Draw! sampling tool you can now get the following variables for each drawing in the sample:

I also added three ways to use the data cards once they have been generated using the sampling tool (scroll down to below the data cards). You can now:

In terms of options (2) and (3) above, I had resisted making the data this accessible in the previous version of the sampling tool. One of the reasons for this is because I wanted the drawings themselves to be considered as data, and as human would be involved in developed this variable, there was a need to work with just a sample of all the millions of drawings. I still feel this way, so I encourage you to get students to develop at least one new variable for their sample data that is based on a feature of the drawing 🙂 For example, whether the drawing of a cat is the face only, or includes the body too.

There are other cool things possible to expand the variables provided. Students could create a new variable by adding drawing_time and pause_time together. They could also create a variable which compares the number_strokes to the drawing_time e.g. average time per stroke. Students could also use the day_sketched variable to classify sketches as weekday or weekend drawings. Students should soon find the hemisphere is not that useful for comparisons, so could explore another country-related classification like continent. More advanced manipulations could involve working with the time stamps, which are given for all drawings using UTC time. This has consequences for the variable day_sketched as many countries (and places within countries) will be behind or ahead of the UTC time.