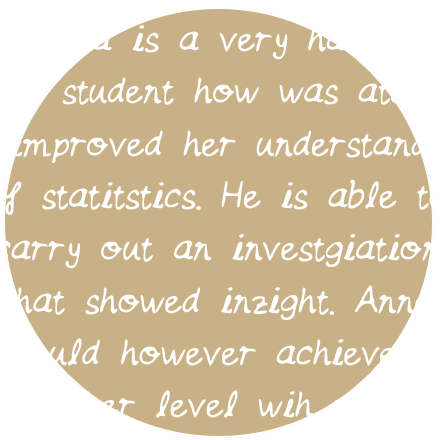 In NZ, it's report comment writing time for teachers, which means for many statistics teachers not just the fun of writing reports but also the not-so-fun job of checking other teachers' comments for errors (I'm looking at you English department!) One of things we used to do every year as part of "report comment writing PD" was to look at different examples of report comments and identify as many errors as possible.

So in line with this kind of activity, for this post I've put together some examples of tasks and/or student responses that demonstrate some common misunderstandings for statistics, each followed by discussion partially informed by comments other teachers made on the earlier version of this post. Use the tabs at the left hand side of this post to move through each part.

For each of the examples:

The Coach of a soccer team ran a new training programme over the season. At the start of the season and at the end of the season the players in the soccer team had to complete different tests for their ball handling skills. One test was for how many times in a row each player could bounce a soccer ball on their head. You have been given the bounce data in the table below. Write a short report for the Coach of the soccer team about the effectiveness of their training programme.

As part of a presentation last year, I tried to summarise what I think is important to consider when faced with anything requiring statistical thinking: What are our awesome messages?

I'm going to use these three principles for some of the discussion sections of this post:

When I initially published this post, I asked for teachers to submit anonymously what they thought was the biggest misunderstanding demonstrated by the example (the task or the student response). After a few days, I shared these comments unedited on this site so that teachers would be able to view and compare what had been written. This was motivated by a desire to demonstrate that we don't all see the same things in student writing or tasks and also to show the range of possible issues with the task or student response.

So what did teachers identify as the biggest misunderstandings?

These are all good points, and it is a difficult to identify which one is the most serious or has the highest priority to address with a student. That there are a number of issues with what was written by the student highlights why it is so important that we always consider how we are building on and building up the key ideas that underpin statistical thinking. For the remainder of this discussion, I have given examples of the kinds of questions I would want to ask students and the kind of thinking I would like students to demonstrate when considering how to write their response to this task.

Desired student thinking: I need to consider whether bouncing a ball on your head is a good/best measure of ball handling skills, and should really explore the data from the other tests to assess the performance of the players. I need to measure the change in performance for each player by taking the the difference of their two test results, this is because the players would have different starting skills and what I want to know is if the training programme improved their performance from this starting point. Since the test data is numerical, I can use a dot plot and box plot to display the differences. [I could also used a link graph, two dot plots which show clearly how the test results are linked for each player between the before and after].

It matters that you are uncertain and there is variation

Desired student thinking: I need to think about the different sources of variation and how they could affect the data I am using. There is natural variation because each player is different has a different ability for the task, and when I use a summary statistic like a mean this I am trying to capture an overall measure of ability, based on the average, for all the players. But a summary measure like the mean won't capture how different each player is from each other in terms of ability. I need to be clearly communicate that I am uncertain and don't know the true value and that is why I will use the word estimate.

So what did teachers identify as the biggest misunderstandings?

At higher levels we tend to be a bit more flexible and loose with the idea of a sample but with younger students it is important to keep things simple and clear. If this set of data did represent a sample from a population, what would that population be? At secondary school level, this should be easy to define, not tricky or messy.

Reviewing student responses is a common feature of good PLD. The goal is to understand more about what misunderstandings students have, so we can be aware of this when teaching and to check for these misunderstandings when using formative assessment. Coupled with his should be to review what statistics education research related to the misunderstanding has uncovered.

When I first posted these examples, I asked for teachers to anonymously submit their thoughts on what they thought was the BIGGEST misunderstanding. I was interested to how similar the responses would be - would we all see the same big issue?

I think one of the cool things about doing an activity like this is that we can assume that everyone sees the same thing we do when reading an assessment task or student work. Sometimes in group discussion you don’t get to hear these different perspectives because someone else says the “right” thing first.

So one way to use these activities as part of any PLD might be to use a similar approach. Ask teachers to choose what they think is the biggest problem and to submit this anonymously through an app like Socrative. Then share all the comments, compare them and discuss the similarities and differences in perspective.

Notes
#statistical literacy
Previous Post
Using statistics to plan a wedding
Next Post
Hey! You’ve got to hide that population away …