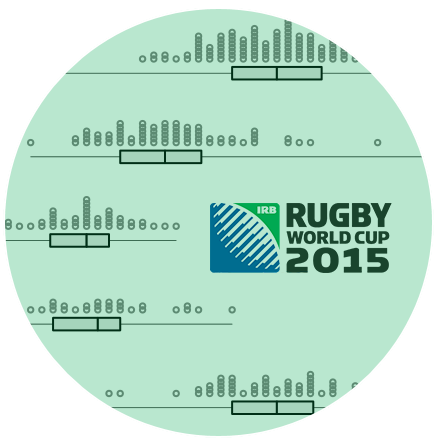 Thanks to @cushlat for the idea 🙂

For each player, the following was recorded:

NB: This data set should be used with care for sample-to-population inference involving comparison, as both categorical variables (team and position) involve a large number of outcomes (16 teams and 11 positions). This means it is not likely that a random sample of 80 players from the population of Rugby World Cup 2015 players, for example, will contain sufficient numbers of players in any two groups for comparison e.g. England vs New Zealand OR forwards vs backs. If you use all the data for NZ and all the data for England to compare the age of players, for example, you will have used all of the data for this population and so there is no need to “make a call” about what is going on “back in the population” 🙂

My advice would be to use this data set for either single variable sampling investigations OR exploratory data analysis for the entire population. There is also something interesting in using the time variable (debut) to explore other variables 🙂

Here is the population data set as a CSV file: rubgy_world_cup_2015